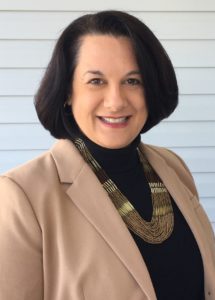 An educator for over 25 years, Dr. Jeanne DelColle is an award-winning social studies teacher who was named NJ Council for the Humanities Teacher of the Year, NJ History Teacher of the Year, and 2012 NJ State Teacher of the Year. After her year of recognition as State Teacher she spent a year and a half at the NJ Department of Education, where she created the NJ Teacher Advisory Panel to bring teacher voices to policy making. Dr. DelColle’s interest in policy led her to be named a National Hope Street Group Fellow, which allowed her to advocate for education on both a state and national level. That same year, after being named a NEA Foundation Global Learning Fellow to examine the education system in Brazil, she designed and co-directed a mentorship program for future GLF cohorts.

In 2013, Jeanne moved to higher education and served as the Strategic Partnerships Specialist in the Stockton University School of Education where she organized placements, implemented innovative partnerships with school districts, developed and facilitated training for mentor teachers, and managed student teaching. In 2018, she became a member of Lead NJ, an organization bringing together New Jersey’s thought leaders to learn, network, and problem solve across sectors.

Jeanne partnered with CFE for almost ten years before stepping into the role of Executive Director, serving as an event speaker and presenter, advisory board member, and Tomorrow’s Teachers college representative. “I am a longtime fan of this innovative organization that is uniquely situated to build the pipeline of future educators from middle school through college. If we are willing to think outside the box, there are unlimited possibilities when it comes to getting students excited about the field of education, especially those students who may have never considered education as a profession. Recruitment of future educators who reflect the diversity within the state has never been as important as it is now. The partnership between TCNJ and NJEA provides opportunities for the CFE to collaborate with New Jersey’s honored educators and deliver programming for future educators that is timely, relevant, inspirational, and broadens perspectives.”